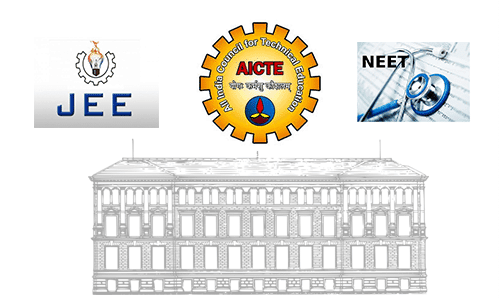 In January, AICTE was bestowedwith the responsibility of overseeing the matter, and the Council finally gave itsconsent to c onduct this common entrance. This test held at the National level will be similar to NEET and will be conducted according to the same pattern. It is hoped that this will assist in resolving doubts of the students.

The AICTE is a national level council and the statutory body for technical education in India. It also directed institutes to create induction courses, revise their curriculum annually and train teachers through the SWAYAM platform.

At a meeting held by All India Council for Technical Education (AICTE),it was stated that holding a common entrance test for all the private and government engineering institutions would help in bringing transparency to the admission process and ensure that the quality of education is not compromised.

“If there is a one entrance examination for all the Engineering Colleges, the government will be sure to bring in certain parameters for the colleges which will be covered under this window. This will definitely bring in abetter quality of education to the engineering stream,” said a professor from Delhi Technological University.

After consultation with AICTE, should the new exam pattern be adopted, students will not need to appear for state CETs. Also, students who are appearing in 2018 will now only have to prepare for one common test to be considered eligible for admission to engineering institutes.

The approach to this common test has been preparedin accordance with other common tests that aim to provide uniformity along with theequal opportunity for quality education. Anofficial from the government stated that the end goal is to make the process more standardized, transparent, and free fromcommercialization and corruption.

Further, keeping in mind the lingualvastness of our country, the common test will be held in different languages. Also, there is the plan to conduct the test several times a year.

AICTE has recommended several regulations which willbe implemented once the necessary approvals are given by the ministryat its next meeting. The AICTE regulations shall be mandatedon all of the recognizedengineering colleges and universities in India. Any University or college that refuses to follow these mandates will lose its affinity to AICTE.

8 Actionable Tips to Get Accredited with NAAC in 2022